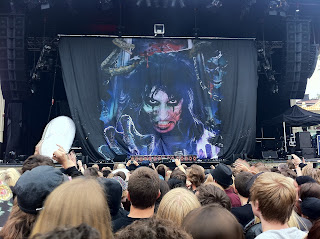 This was one of the better Alice Cooper conserts I've been to. It was so full of joy and caught me from the beginning. The scene was hidden behind a big curtain with this tour's logo but i saw the top of the tower where Alice sang Vengeance is Mine last tour and I thought that we were going to see Alice sing Vengeance is Mine in his eight-arms jacket. Here they fooled me though.

The concert started with a recording of Vincent Price's monolouge from Welcome to my Nightmare and after he has put forward a slice of his own personal philosophy about mankind Alice states that these words are true if we don't pledge allegiance to The Black Widow. Here the curtain drops and reveals the band and Alice in his eight-arms jacket but of course they don't open with Vengeance is Mine but the most fitting Black Widow. From the beginning they catch and keeps me in their grip.

The tour is a kind of best of Alice Cooper tour and I wasn't really psyched about it but they did throw around the order of some songs and put in some unusual ones as Halo of Flies. Early in the concert they play Billion Dollar Babies and Under my Wheels. Songs that usually is played towards the end or even as encores. For me Under my Wheels is a song that really gets me going on concerts and putting it early really got me goining early. It's one of those really good rock 'n' f'n roll songs.

As the second song comes Brutal Planet, not heard since Brutal Planet/Descend into Dragontown I think. They follow up with I'm Eighteen, Under my Wheels and Billion Dollor Babies.Then comes No More Mr Nice Guy (with the gests at the right places as they should be) and Hey Stoopid all while the band seems to enjoy doing the show and runs around and plays and the songs aren't just played ''as they should be''. When they go into Is It my Body Alice comes out with a big snake around his neck and doesn't seem too bothered about that and the snake doesn't show any stage fright either.

Alice leaves back the snake and starts to conduct the band in the intro of Halo of Flies. During a longer instrumental part Chuck gets up on a piece of equippment in the front and shows of a little and also starts to engage certain parts the audience to shout at the right places when he stops playing. I have to say that Chuck Garric is both cool and a good show man, acts with the audience and give them attention. Most of the band also utilizes a board that goes out on the left side of the stage to show off for the audience there and to engage them too and not just the ones in the middle front.

After Halo of Flies Alice comes on stage in a jacket with the revealing words New Song on the back. They then go off in a song that has some similarities to some songs from Dirty Diamonds. When the audience not really catches on in the chorus Alice throws of the jacket and reveals a shirt with the chours and title printed on the back - I'll Bite your Face off. I liked it and guess it's from the album that's coming 16th september (Welcome to my Nightmare Part II).

Out comes the biggest monster I've seen on an Alice Cooper Show, possible bigger than Eddie too, some kind of perverted Frankenstein-Cooper Monster and hunts Cooper off the stage. The monster stumbles around and gets chased off the stage by Chuck and the band breaks into a guitar adapted Clones (We're all), another surprise song. Suddenly the Alice in the Tesla Coil Steam Punk machine starts too move and sing Clones (We're All).

Then we get the mandatory Poison and that's well, it's mandatory I guess and it get's everyone going although it's not the most interesting of the songs. Then band then carries on into Wicked Young Man and here the rock reporter has hunted Alice once too much and gets impaled and dragged off the stage. The Wicked Young Man is quickly approached by two men who grabs him and drags him towards the guillotine that is rolled onto the stage to tunes from Killer. Alice gets beheaded and as the band plays I Love the Dead the executioner kisses with Alice's head and spills some blood in the the direction of the audience. He then gets chased away and Chuck leads the audience in the chorus of I Love the Dead. A song Chuck before and also this time sings with empathy calling on us sinners to sing it.

We then call them back on stage and they perform Elected with lots of confetti and Alice in a mirror-like tuxedo and top hat. We also get an guest appearance from Ryan Roxie who lives in Stockholm nowadays. Since it's Foruth of July Ryan has dressed up in a shirt with a big american flag. Alice on the other hand has, under the tuxedo, blue and yellow clothes and waves a big swedish flag.

Alice then asks if we want one more and of course we want that and they play a cover, Jimi Hendrix's Fire. A song Alice has done a studio version of somewhere in the ninties or so. Aparrently it's also Steve Hunter's birthday. Then it's over and still a little high and very happy I slowly start to feel stuff like hunger and aching legs again. 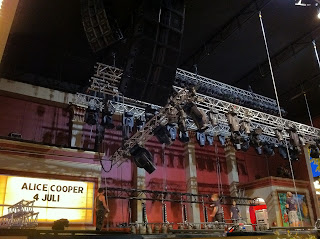