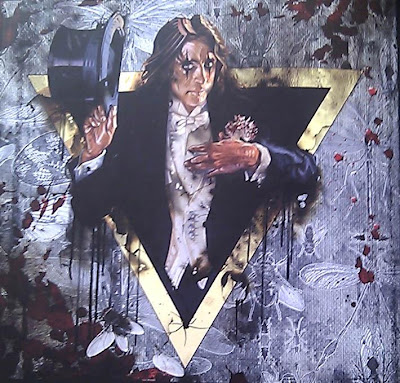 So Alice has released a Welcome to my Nightmare part 2, dubbed Welcome 2 my Nightmare. What's it about and where do we place it in the story of Steven?

The actual nightmare story is 14 songs with two bonus songs; Under the Bed och Flatline. The albums starts out with the song I Am Made of You. My first thought when I heard the song was that it was the nigtmare or The Nightmare Guide, like The Curator from Welcome to my Nightmare part 1, that sang to Steven and and explained that the nightmare and/or The Nightmare Guide was conjured up by Steven himself. It felt fitting since one might conclude that nightmares actually comes from inside one self rather than from some outside source. Alice himself has said that the song should be a little unclear. It should not be obvious whether for example he sings to the girl in his dreams or if he's singing to God or if he's singing to the audience that he's made up of them. The song tries to capture some near sleep confusion when things make sense and suddelny don't but then again make sense but maybe not when you wake up again. It might also repressent some sort of goodnight prayer from Steven when he falls to sleep.

The next song is Caffeine but I would like to place the bonus song Under the Bed herealthough one might argue that it doesn't really fit with this album but rather with the first Welcome to my Nightmare or Wind-up Toy. According to Alice they wrote this one before the concept of the album was really clear and later decided it didn't really fit and I can see why. In any case it's a I-know-that-it-will-be-terrible-to-go-to-sleep-and-I-got-terrible-things-under-my-bed-that-comes-forward-in-the-dark song. The song speaks about the things living under Steven's bed and who among other things ate his cat.

Caffeine is an up tempo straight forward song with some nice variations. Steven knows he can't go to sleep and takes refuge in lots and lots of caffeine and even amphetamine, anything to not go to sleep because that might mean the death to him or even most certainly means the death to him. It doesn't help though and at the end of the song he desperately calls for more and slow down and fall to sleep. Caffeine is followed up with a short transition song where Steven makes a last futile attempt to not fall to sleep, ended with a ''no'' and then the theme from part 1's Steven starts. Now we now it's to late, Steven has fallen to sleep and enters the nightmare via the instrumental ending of the song The Nightmare Returns.

The nightmare begins with Steven entering the Nightmare Express symbolized with the song Runaway Train. It's a song quite good capturing the feeling of a speeding train who eventually in the end speeds beyond control and crashes. Steven finds him chained to thirteen other men ''rotten to the core'' and to the floor in the train. He tries to argue that he's in somebody else's dream to which they just comment ''Brother so are we''. He then tries to argue that he's a big celebrity and presumably don't deserve the wrong dream but they answer him htt he's noone here, that he's in no demand here. This gives some echos of Dragontown's Disgraceland where the main character, presumably Elvis Presley, finds him self in the same situation of not being able to call upon his earthly celebrity and goes to Disgraceland, presumably Hell. It's reference to being a celebrity might also lend some credability to the connections between Steven and the stage persona Alice Cooper and the real person Alice Cooper/Vincent Furnier. In the comments in the Classic Rock theme magazine Alice himself is several times speaking of Alice participating in the nightmare as if he (stage Alice or real world Alice) and Steven were the same. In pre-release comments Alice has also talked abut Alice's nightmare and refferred to part 1 as Alice's earlier nightmare. The train crashes and Steven in some nightmarish logic survives and the next song starts. Surviving is a realtive expression though as the last lines of the song speaks about Steven's hurting body and sleeping in a graveyard on the wrong side of the dirt. In a grave?

Last man on Earth paints the picture of Steven being alone on Earth for some reason. A picture of the crashed train in the fan pack shows a picture where Earth seems destroyed by some catastrophe but on the other hand, as we shall see, maybe Steven isn't really on Earth. In a Tom Waits kind of song Steven finds himself all alone on Earth but as the song goes on he comes to like it since he never really liked the other guys and now he has everything for himself and can behave as he wants. We here also gets a glimpse of this being some state of eternity and as the song crescendos with Steven's ''It's all mine, mine, mine, mine, mine, mine, mine!'' and ends we hear some applause wich of course is a little strange when you're all alone.

In The Congregation Steven/Alice is welcomed by The Nightmare Guide. The song is sung by Alice but the narration where The Guide actually speaks is done by Rob Zombie. Here we again are told that Steven died. The guide greets him as concludes that he, Steven, joined ''them'' when he died but he should not be afraid. According to the Guide Steven entertained himself to death and now is welcomed to ''The Congregation''. The Guide explains that he understand that Steven had other plans involving singing bluebirds ringing church bells but his application was denied but ''they'' in ''The Congregation'' love him anyway. Other ones here is ''the boys from Wall Street'', priests who has lost their holy status, telemarketers, lawyers, pimps and mimes. ''They'' hope he's gonna like but in the end he, Steven, is till gonna fry.

Now enters some strange and wonderful woman but with a less fantastic real herself underneath. Steven tries to run but is drawn to her and don't really try to escape, lured by for example her red lips, her blood red lips. She pushes him down on her burning bed and just to make everything totally clear tells him that if he would resist ''I'll bite your face off, little man''. I'll bite your face off is also what the song's named. In a comment Alice points her out as one of his guides in the nightmare.

The girl guide takes Steven to a disco, a nightmare to Alice/Steven, and there he finds a lot of zombies, maybe even only zombies. He mows them down with a machine gun but that doesn't matter, they just keep coming back. In this song, Disco Bloodbath Boogie Fever, there's a small reference to maybe being in Hell. In comments in the Classic Rock themed magazine Alice says that in Alice's/Steven's mind he is trying to kill disco when he kills the zombies but the zombies/disco just keep coming back again.

In comments to the next song, Ghouls Gone Wild, Alice makes it clear that the party is in Hell. There's a lot of zombie girls there and Alice/Steven is after a while actually falling in love with one of them which leads up to the sweet ballad Something to Remember Me by. In the context it becomes some Alice Cooper weired humor instead of a normal love ballad. Alice/Steven is standing there in love with a zombie girl falling apart and he or the girl sings ''something to remember me by'' which is also the name of the song.

Now Steven enters a new part of the dream. It's not clear whether he actually experiences this himself or helplessly whatches it happen. In comments Alice has stated that it should be unclear as one of those parts of a dream where you don't really know if you're part of the dream or just a spectator. When Hell Comes Home is about a little child and his mother terrifyingly dominated and mistreated by his dad/her husband. ''When Hell comes home'' is the dad arriving at home with the boy's mother hiding and trying to cover her bruises for others and the boy himself futilely trying to hide from dad in his room. There's no escape though, his drunken dad comes clamping up the stairs and bangs on the kid's door. In the end the kid can't take it anymore and dad's in for a surprise. The kids gets gun, being America probably dad's own gun, and shoots dad between the eys and writes dad's last farewells in dad's own blood. Anything to make dad leave him and mom alone.

What Baby Wants is a duet between Alice and Ke$ha where Ke$ha plays the part of some devilish seducer bent on getting Steven by her strings. Alice/Steven tries to resist and calls up memories of other meetings with other deceptive or masquerading creatures (The Curator from part 1 and The Showman in The Last Temptation?). In the end falls into her web anyway.

In the next song, I Gotta Get Out of Here, Steven summifies his nightmare so far and wants to get out of the nightmare and wake up again. he don't know why he has fallen from grace but he wants to wake up again. That's where a choire asks him what partof dead he don't get. Steven tries to argue that he only signed up for a nightmare, nothing else, that death is a little drastic, that he wasn't informed about this but in the end there's no help. He can't fight it. The bonus song Flatline from the vinyl version of the record contains the sound of a heart surveillence machine giving the warning signal  when the heart stops and someone says something dark and blurry. If one plays the record at 78 RPM the call is clear, ''Steeeeeeeeven''. Apparently Steven dies somewhere along the nightmare and goes to either Hell or Purgatory. The record ends with The Underture which is a instrumental piece themed on more or less well known parts of Welcome to my Nightmare 1 and 2.

Where to place it in the story of Steven has to be it's own post though.
Posted by illern kl. 13:56

Email ThisBlogThis!Share to TwitterShare to FacebookShare to Pinterest
Labels: 2011, Alice Cooper, Steven, Welcome 2 my Nightmare, Welcome to my Nightmare