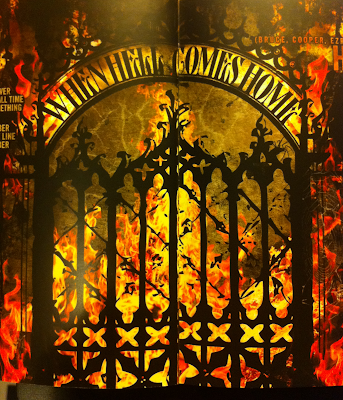 Okay, so I'm gonna try a little different approach to the story of Steven. Acutally I'm gonna place a song from the latest record, Welcome 2 my Nightmare, as the first event. My speculation here is that Steven and his mom gets mistreated by their father and this is what's described in When Hell Comes Home and that leads up to the boy, I assume Steven, shooting his father. It do fit in with the ballad Only Women Bleed who actually deals with mistreated women (by men). Steven shooting his own father might be the scaring episode of his life that the song Steven (from Welcome to my Nightmare) refers to but I don't think we're there yet since for example Escape implies some age, like 16 or soemthing since the main character obviously have some sort of stage career.

Next I think The Last Temptation takes place. Here Steven is something like twelve years old or so. Steven meets The Showman and gets challenged by him and Steven's friends to enter The Theatre of Real. The Showman tries to lure Steven into a contract by showing him troubles in grown-up life and offering forever childhood, for the small price of Steven's potential. Steven sees through him though and in the end burns down the Theatre of Real and escapes with the girl Mercy who in the end shows to not be real and disappears and leave Steven alone, abandoned.

Welcome to my Nightmare might actually take place several years later in Steven's life. The song Escape implies a certain age since the escape to the stage and the stage persona craves some sort of career and that a certain age. In the song Steven Steven remembers something horrifying that happend years ago. Someone died and Steven wants in certain moments flee to his childhood before this happened and in certain moments get forced back to reality and after the horrifying event. The someone might be Steven's father shot by Steven after mistreating Steven and his mother for some time (Only Women Bleed and When Hell Comes Home). Death of someone loved can be horrifying enough but having ones father make you hate him that much that you shoot him probably creates a lot of tension and a not totally sound personality. The temptation of escaping to childhood also is a little like the temptation that Steven might haven fallen for in The Last Temptation.  It is also plausible that When Hell Comes Home and the murdering of the father takes place after The Last Temptation since it hasn't to be about a really young boy although Welcome to my Nightmare gives that impression.

Wind-up Toy, a song from the album Hey Stoopid, places Steven in an asylum. It's hard to tell whether Steven's young or if his mind has snapped and he's escaping by becoming crazy and ''becoming young again''.

Along Came a Spider tells the story of a serial killer that in the end shows to have been in anasylum for 27 years and not bein able to have committed the crimes and leaving for the listener to think about whether everything just have taken place in his mind or if he in some way committed the crimes. My friend Bellis did his own take on this in a post on the blog here.

In Welcome 2 my Nightmare Steven is having his last nightmare. As it goes on it shows more and more of Steven actually dying and probably going to Hell.
Posted by illern kl. 19:06

Email ThisBlogThis!Share to TwitterShare to FacebookShare to Pinterest
Labels: 2011, Alice Cooper, Along Came a Spider, Steven, The Last Temptation, The Spider, Welcome 2 my Nightmare, Welcome to my Nightmare