A review of Detroit Stories that I wrote, in Swedish, for Rockbladet.se.

This is  a little something I wrote some time ago. Slightly frustrated by Alice not doing a nightmare show although such a show was more than hinted at in interviews I wrote a little script for an Alice Cooper's Steven Show. Unfortunately it's in Swedish but I'll try to get around to translating it.

Link to The Steven Show (PDF in Swedish)
Posted by illern kl. 20:19 No comments:

Ryan, Orianthi and Chuck at Skogsröjet

Besides Alice and the band doing two fantastic shows in Gothenburg and at Skogsröjet I got a little lucky at Skogsröjet. Ryan Roxie were having a little meetup after his gig with Roxie 77 (which was a nice gig as well, inspired and happy band) and although we only got to meet Ryan and not the others in Roxie 77 Orianthi popped by and talked a little and did autographs and photos. Ryan seemed slightly stressed/confused but was nice as the other few times I've met him. Orianthi was nice to meet as well but she left soon.

Later I saw a familiar character walking across the plain between the stages and the merchant area and after a second or two I recognized the short statue and the tattoos (new haircut again confused me from behind) and realised it was Chuck Garric so I ended up having a short talk with him and helping him hand out some flyers for his new band Beastö Blancö. 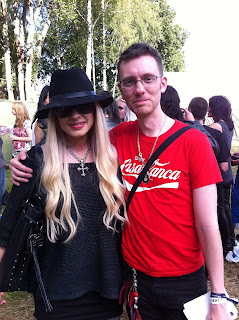 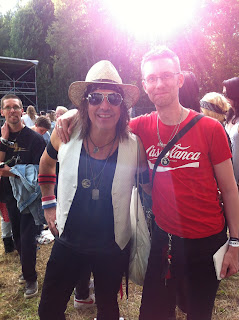 When I watched this show I had already seen the fantastisc show at Liseberg two days earlier and by that I was slightly spoiled and probably can't compare them with full justice. The show at Skogsröjet was good though and really fun to watch. Acquaintances that didn't see the Gothenburg show thought it was very good. Part of the Liseberg show winning was the audience, no drunks and no fights. Alice and the band were really tagged here as well but I still liked the Gothenburg show best and felt they were having the most fun there. A little sad for the ones watching only the Skogsröjet gig was that the snake didn't show up during ''Is it my body'' which it did at the Gothenburg show.
Posted by illern kl. 21:32 No comments: